what is a satoshi

So what is it? Why is there so much fuss surrounding these coins and what are the stablecoins you should know about?

Stablecoins: What On Earth are They?

In its most simple terms, a stablecoin is a cryptocurrency that is pegged to a tangible, or stable, asset. Examples of a stable asset include gold or the US dollar. The idea of backing a cryptocurrency with a tangible asset is to reduce the price volatility associated with standard cryptocurrency. In doing so, digital coins become far more practical for everyday use, and it may encourage global adoption.

Standard cryptocurrencies such as Bitcoin have high volatility. On any given day, the value can suddenly increase or decrease (often by significant percentages) for no apparent reason other than market hearsay or fear mongering. This is because the value of Bitcoin, and other cryptocurrencies, depends on what value is given to it by investors. It does not depend on a physical asset to determine its worth. Because of this, Bitcoin and most cryptocurrencies are inconvenient for daily transactions.

Imagine this: You are a vendor, and you sell a dress in exchange for 300 RPX. At the time of the transaction, 300 RPX could be worth $35 USD. However, the next day that same amount of RPX could now equal $23 USD. You wouldn’t be a very happy vendor. Further, you would be consistently aware of the ever-changing value to which your wares are a victim too.

Price changes like this are shocking for merchants and consumers alike. But the adoption of stablecoins may be a catalyst to the decentralized cryptocurrency system working mainstream.

>> Are Stablecoins the Future? The Winklevoss Twins Seem to Think So!

The goal is to create an optimal currency.

According to Forbes, “an optimal cryptocurrency should have the following four traits: price stability, scalability, privacy, and decentralization.”

So let’s look at some examples of stablecoin projects aiming to create the optimal cryptocurrency.

You can’t talk about stablecoins without giving a nod to the pioneer. Tether is notable because it’s widely considered the first stablecoin.

Tether claims it is 100% backed by fiat currency held in a reserve bank account. It is said to be backed 1-for-1 to the US dollar, with 1 Tether being equal to $1 USD. It will remain fully backed once all Tethers in circulation are less than or equal to all the fiat held in the reserve. 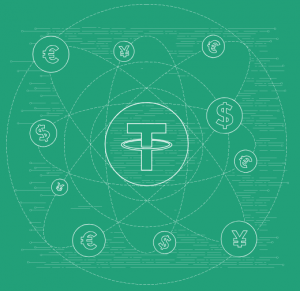 Most Established but Controversial

As it is the pioneering stablecoin, Tether is the most established and is well-integrated. However, Tether has faced controversy in the past, as its claims have not been legitimately proven. The company’s terms and conditions state that “Tether reserves the right to refuse to issue or redeem Tether Tokens.”

Some fear this statement gives the company credence to not redeem the currency at the 1-to-1 value it claims.

uBUCK is a digital currency wallet that has fiat capabilities.

According to its website, uBUCK enables you to “pay people with uBUCK cash with lightning speed, make purchases online at approved merchants or withdraw cash at the ATM.”

With the ability to buy uBUCK Cash using either Bitcoin or Ethereum cryptocurrencies, a user is effectively “storing” their cryptocurrency in a stablecoin that is tied to the US dollar.

How Does It Work?

It works like this: A user buys a prepaid uBUCK voucher from the uBUCK mobile application. As stated, you can use BTC or ETH to buy, but regular fiat credit and debit purchases are also accepted. 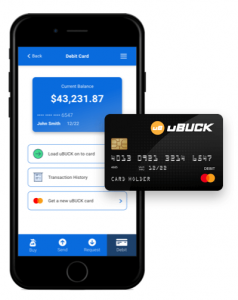 Users then load the uBUCK Debit MasterCard (linked to the uBUCK wallet) with their voucher credit, effectively converting the uBUCK Cash into dollars by doing so. This then means ATM withdrawals and regular shopping around the globe is possible with the uBUCK MasterCard.

uBUCK comes with four secure wallets. These are the uBUCK Cash Wallet, a Bitcoin wallet, Ethereum wallet, and the USD Debit card. By having a multi-functional wallet, a user can manage their digital and fiat currency in one convenient place. Then, as stated, by using the uBUCK app, the wallet enables users to store, convert, and spend their fiat and cryptocurrencies.

Another interesting feature of this platform is that users can send uBUCK vouchers to other recipients anywhere around the world for free. Essentially, the service allows free money transfers in only a few minutes.

Maker is a decentralized autonomous organization, and its stablecoin is called Dai. Pegged against the US dollar, Dai operates on the Ethereum blockchain and, as such, it is transparent.

Each Dai is worth $1 USD, and the website states that “Every Dai is backed in excess by collateral at all times, so you never have to worry about its value moving up or down.“

“Every Dai is backed by another asset of value. Our collateral portfolio is diversified, allowing multiple assets to guarantee the value of each Dai.”

The system is said to be quite complex. To receive Dai, you have to first send your ETH tokens to the Maker platform where they will be “locked up.” Then using the Ethereum blockchain, Maker maintains stability by an autonomous system of smart contracts.

According to its website, Dai offers freedom from volatility:

“Dai stands to transform the financial industry by creating a stable and decentralized currency that will allow businesses to realize the future of money.”

>> Facebook Cryptocurrency: Is the Tech Giant Developing a Stablecoin?

Stablecoins can bring stability to the crypto world and offer real potential for global adoption. The key is to create the optimal cryptocurrency inclusive of price stability, decentralization, scalability, and privacy.

The technology is still relatively young and will continually evolve, but it is clear that demand is there. People are looking for the balance between a decentralized payment network and stable value.

Everybody wants to feel secure in their transactions and know that they won’t lose value on their assets for no reason other than market hype.

We’ve mentioned only a few stablecoins here. There are more out there! Do you have any favorites? Do believe the technology will work and bring us towards that optimal currency?

Let us know below!

According to reports, Coinbase executive Dan Romero is stepping away from his role as vice president of international business. His

Lawmakers in California have introduced a new bill geared towards cannabis companies. Assembly Bill 953 was introduced on February 21st. This

Over the years, Square (NYSE:SQ) managed to emerge as one of the most innovative payments company in the United States,

CFD could be a very foreign word for a crypto trader, but for traditional market traders, it is one of the most useful assets to trade with on different markets. CFD is an abbreviation for Contracts for Difference, which are basically assets that help you “buy a price” and not the asset itself. It may sound a bit confusing, but it is still quite easy to understand once you know the basics.

Crypto CFDs are exclusive to CFD or Forex brokers. These companies are able to offer leverage on these assets, which is the primary reason why they are so attractive. For example, if I go to this CFD broker and engage in a $100 trade for BTC CFDs, I can then use a leverage of 1:100. Basically what that leverage does is increase the volume of my trade by 100, meaning I can now trade with $10,000 instead of $100. This, in the end, may earn me more than I would with my own assets. Basically, the broker lends you funds in order to increase your trades and thus your profits as well. Crypto exchanges rarely have this feature, which is why CFDs are not as well known among the crypto community.

Liquidity is also an advantage of crypto CFDs because they can be sold for fiat currencies, making them a lot more valuable.

Another small advantage is the lack of a crypto wallet, as there is no need for one. Therefore traders have all of their assets on one single platform, which helps the logistics. Unfortunately, this is where the advantages end and massive disadvantages begin.

>> How to Become a Bitcoin Trader: A Beginner’s Guide

Leveraging can be a double-edged sword. Although leveraging can offer bigger profits, it can also lead to massive losses, which may cause the trader to fall into debt with the broker. If you ever decide to engage in a crypto CFD trade with leverage, make sure to set a stop-loss on a point where you have half of your initial investment left. So if you invested $100 and got 1:100 leverage, you would have to set the stop loss at somewhere around $9,950 to avoid a complete zero-out of your account.

Another disadvantage is that CFD trades have deadlines. This means that when you place an order, that order will expire in a few days or so. This renders long-term investments completely useless. You could technically still do it, but the over-night fees for maintaining the position would just make it unprofitable. The over-night position is as it sounds, a position that lasts more than 24 hours, and it is usually accompanied by a fee.

Another disadvantage is that you don’t actually own cryptocurrencies, meaning that you cannot allocate them anywhere you like. For example, let’s say that there is a service that is only available in Bitcoin or Ethereum; you would not be able to pay with a Bitcoin or Ethereum CFD, because they are not real cryptos. Furthermore, the allocation may become a problem as a broker’s policies may change about crypto CFDs, which could stick you with the trade or force you to opt-out in an unprofitable position. With crypto exchanges, it’s different as you can immediately allocate the cryptos to another exchange’s account.

We have two very clear paths in front of us. Crypto CFDs come with advantages as well as disadvantages, so deciding how you want to proceed requires extensive research and comprehension. Hopefully this article can be a starting point to both.

Raidenbo, a fast-growing exchange, has emerged as one the most promising places to trade and earn. Raidenbo offers modern technology,

Binance has sunk to 12th in the top ten cryptocurrency exchanges, according to the latest list published by London-based crypto

Cryptocurrency criminals have taken in an estimated $4.3 billion USD in 2019, according to CipherTrace. CipherTrace, a cryptosecurity company based